One of the main things I missed on my Elegoo Mars Pro 3D Printer was remote access over WiFi. I wanted to upload files, print and keep track of print status while I’m away from the printer. Luckily, the Elegoo Mars Pro exposes a serial port on some of its motherboard pins, allowing for it to be controlled with a Raspberry Pi Zero W. I wrote a software called mariner for controlling it over HTTP and here I document my current setup.

Disclaimer: this software and instructions are provided “as is”, without warranty of any kind. There is no guarantee this will work on your printer, nor that it won’t damage it. Do and use it at your own risk. You should also keep the software behind a firewall. If you need authentication you should set it up with a reverse proxy, as there is no support for authentication on mariner.

As of this writing, mariner supports desktop and mobile browsers and can:

This is what the interface looks like while printing something: 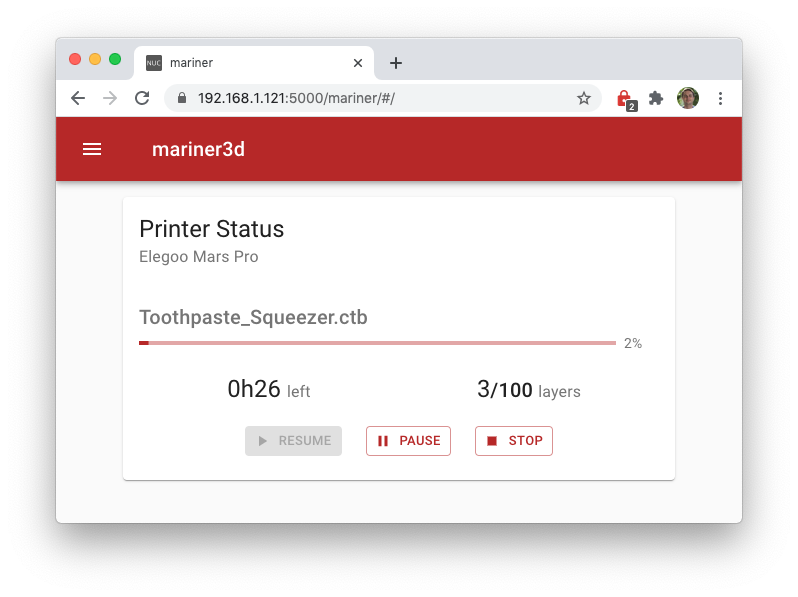 The Elegoo Mars Pro has a lot of room inside, so I was able to put all the required components inside the case. The printer itself looks like a standard Elegoo Mars Pro, but with remote access over WiFi!

Once you do this mod, the external USB port of your printer won’t be usable since the port will be used by the Raspberry Pi (it is a reversible process though).

In order to do this mod, you will need:

Elegoo has a good video on how to replace the printer’s motherboard, so I won’t get into details about how to disassemble the printer and remove the motherboard. You can watch this video on YouTube for details on that. 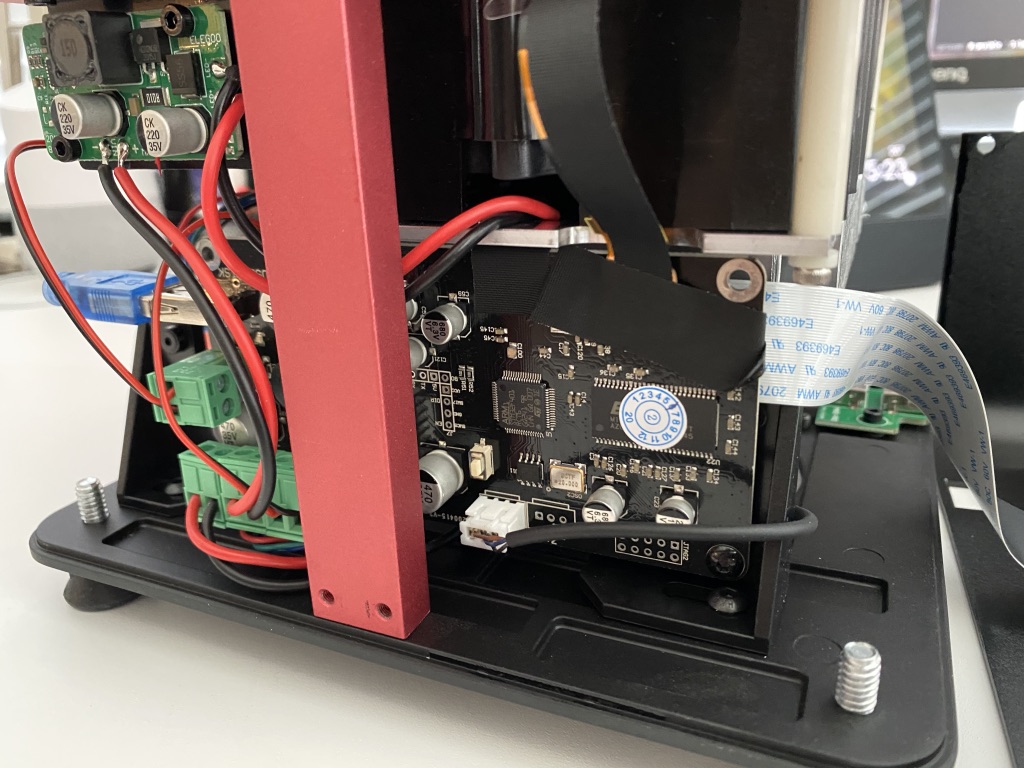 Once you remove the motherboard from the printer, you can see there are pins exposing the serial port right in the middle of the board. Look for the pins labeled GND, RX, TX. You will have to solder male pin headers to those: 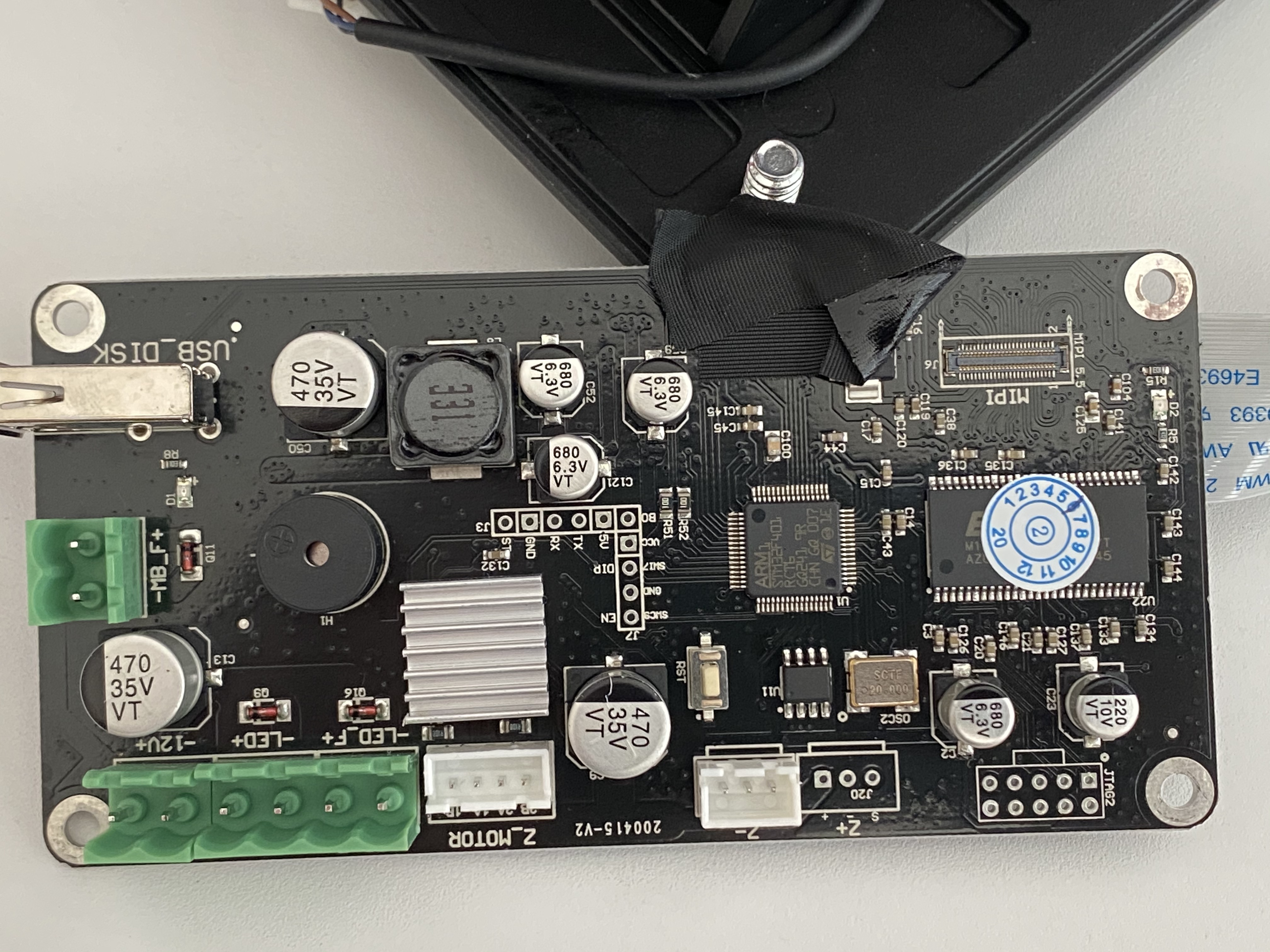 Note that you don’t want to connect the 5V line, so you don’t need to solder a header to it. Just GND, RX and TX. Once you have those three pins soldered, plug the jumper wires to the pins you just soldered and put the motherboard back into the printer (it’s harder to plug the jumper wires in once you have placed the motherboard back into the printer): 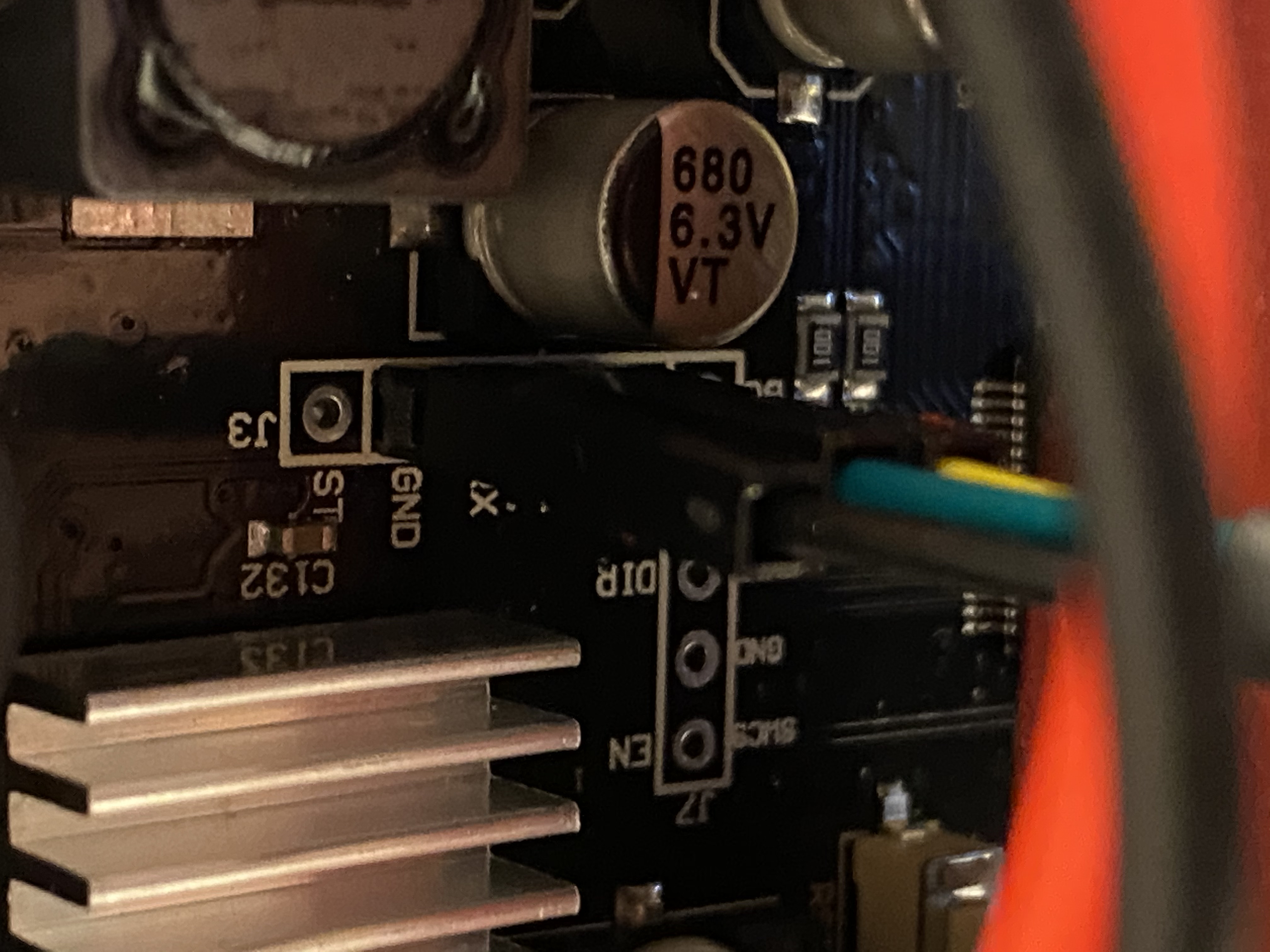 If you don’t have a male pin header on your Pi, first solder them in.

Connecting the Pi to the printer’s serial port

You should connect the wires from the motherboard to your Pi like this: 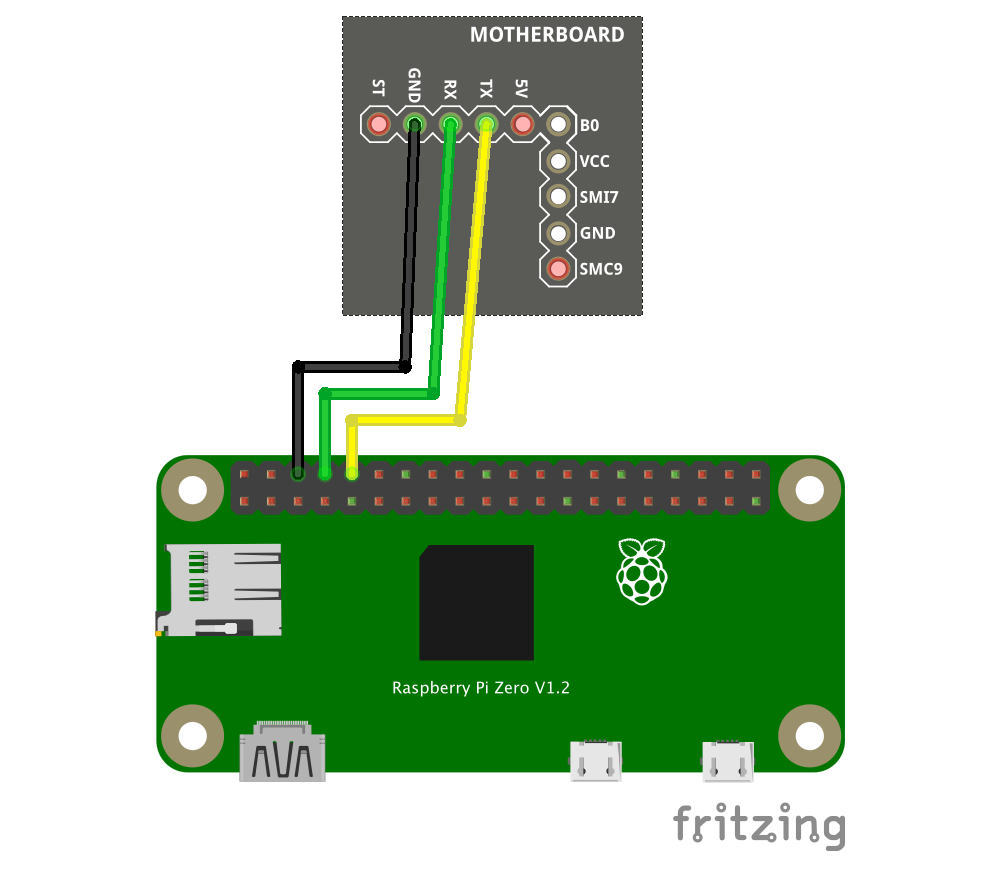 pinout.xyz is a good reference if you’re unfamiliar with the Raspberry Pi’s GPIO pins. Note that the Pi’s TX pin is connected to the motherboard’s RX pin and vice-versa.

Connecting the Pi to the printer’s USB port

Note that the Pi has two USB connectors: the PWR IN one should be connected to your power source (again, this could be a buck converter from the printer’s 12V or an external power source).

The other port will be connected to the “USB Disk” USB port on the printer’s motherboard. This is what will allow the printer to see the files uploaded to your Pi.

Wrapping up the hardware 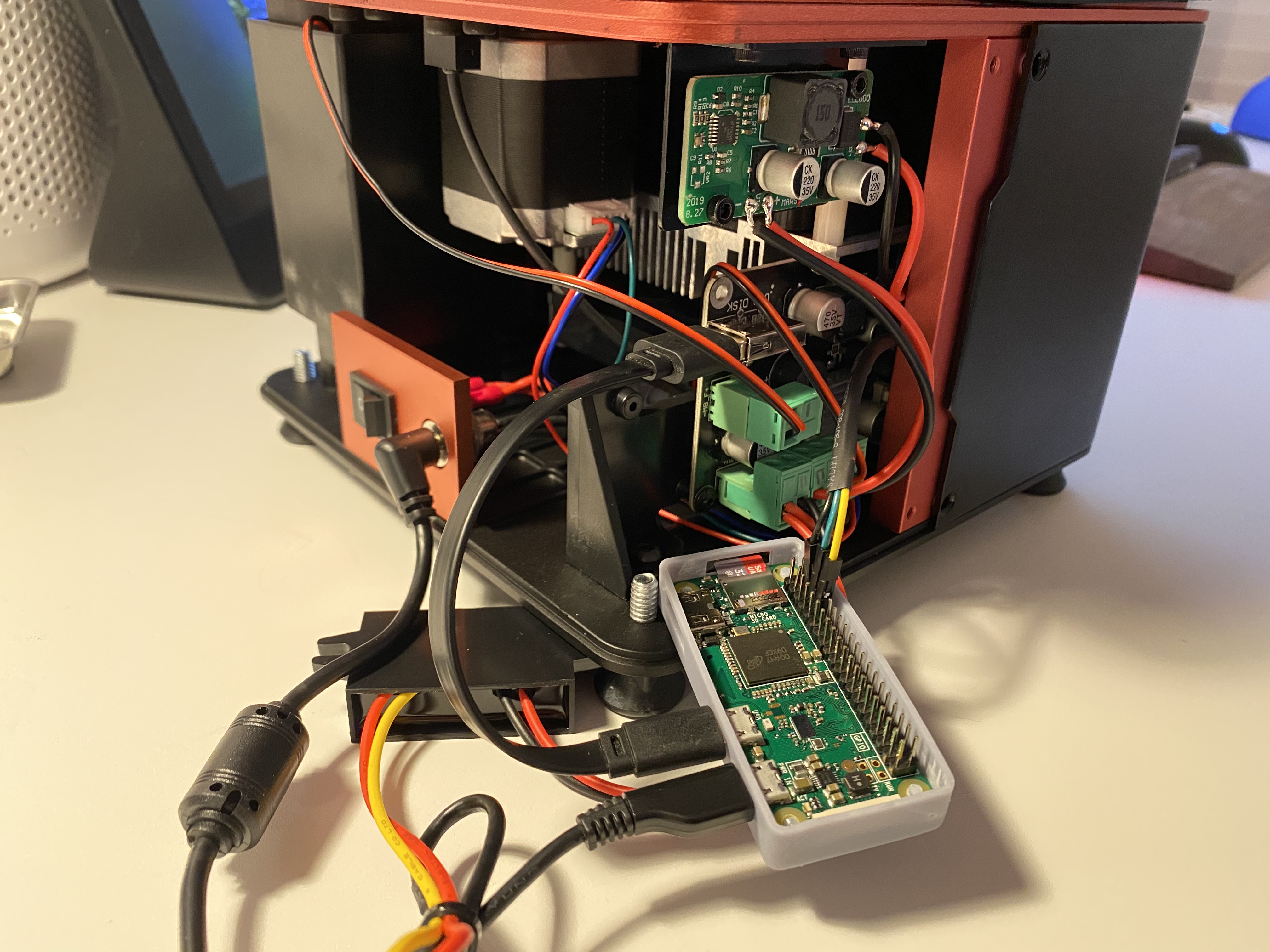 I recommend you to setup the software and make sure things work before putting everything inside the printer and closing the case.

Setting up the software

All the hardware should be done by now, so it’s time to setup the software!

Start by setting up Raspberry Pi OS on the SD card. Make sure to enable SSH access and setup a 2.4GHz WiFi connection, as we will be using this Pi in headless mode. There are plenty of tutorials on this online,[1][2][3] so I won’t get into those details.

Everything after this point assumes you have a working Raspberry Pi OS install with SSH access over WiFi.

Once you’re connected to your Pi through SSH, enable my PPA repository:

Then install the mariner3d package:

Allow the printer to see files on the Pi

mariner lets the printer access its own files by using Linux’s USB Gadget system, allowing it to act as a mass storage device.

To get this to work, first enable the USB driver for gadget modules by adding this line to /boot/config.txt:

Enable the dwc2 kernel module, by adding this to your /boot/cmdline.txt just after rootwait:

In this case I’m setting up a 2GB (2048MB) container. You can set up a bigger one by changing the count parameter of dd.

Create the mount point for the container file:

Add the following line to your /etc/fstab so the container file gets mounted on boot:

Finally, make /etc/rc.local load the g_mass_storage module by adding this to it:

Once you restart the pi, the printer should start seeing the contents of /mnt/usb_share. You should be able to scp files to that directory and see them on the printer.

Setting up the serial port

In order to have the Pi talk to the printer’s motherboard, we need to setup the serial port.

First, enable UART by adding this to /boot/config.txt:

Since we will be using the Pi’s serial port, you also need to disable the Pi’s console over the serial port:

Lastly, remove the console from /boot/cmdline.txt by removing this from it:

Reboot the Pi and you will be all set. You can check that mariner is running with:

If everything is good, you should be able to access it by opening http://<pi ip address>:5000/ on your browser: 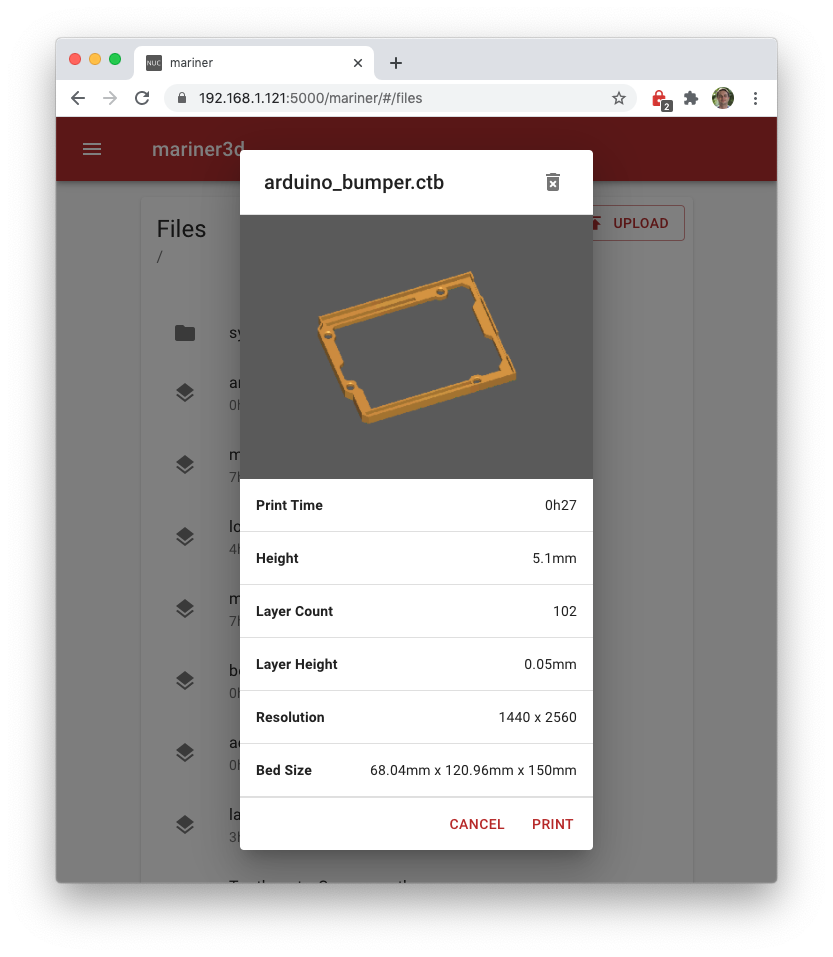 If something doesn’t work, checking the logs of mariner3d generally helps:

That’s it! I hope this is helpful to someone. If you have questions, bugs to report or want more features on the software. Feel free to create an issue or a pull request on the GitHub project!